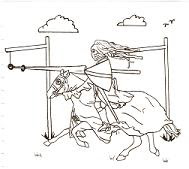 From "A Place to Remember", by Georgia Payne Pinkston
AN IMMENCE GATHERING, FINE SPORT, A DELIGHTUL DAY, & A GRAND BALL AT NIGHT.
"The tilting at the Tourney has been a prominent source of public rivalry and enjoyment for many years in East Carroll--always attended by large gatherings from far and near of the fairest and best of our people. Last Tuesday was no exception to the Knightly festivities. Our town was crowded with fgaily dressed people, the sky was clear and bright and cheeful ancitcipation of pleasant time seem to lighten up the faces of everyone.
At noon, precisely, sixteen Knights in charge of Capt. W. H. Harvey, escorted by Grand Marshal, Dr. Frank E. Artaud, left town for Arlington accompanied by a large concourse.
Judges selected to determine the result of the contest were T. P. Leathers, of New Orleans, Judge Baird of Morehouse, Hon. J. M. Kennedy of Providence. The time keepers were Messrs. Douglas of Tensas and Searles of Vicksburg, Mississippi. The scorers were Dr. W. E. Long of Providence, and Herald was C. A. Donnally of East Carroll.
Capt. Harvey in company with the other Knights formed a line before the Judges' stand and listened to a brief, but eloquent oration delivered by Sir Knight Ransdell, who was introduced to the Knights and assembled crowd by Judge J. M. Kennedy.
The distance from start to arch ring is 100 yards, time was 8 seconds; with 1 1/4 inch ring. Three rings were tilted for in the run, and four runs for each Knight, or a chance for 12 rings.
Pending the prliminaries the wind rose in fitful gusts and by the time the actual tilting began the rings were seen occasionally to swing to and from to such an extent as to make it quite difficult for each swift advancing Knight to capture the much coveted circles.
Given below are the names of the Knights, their nicknames or non-de-plumes, and their totals as rendered by the Judges:
George Douglas "Knight of Laura Lee"; 10 rings, Archie Douglas "T. P. Leathers"; 9 rings, M. P. Erwin, "California"; 8 rings, Nolen Harvey "Young America; 6 rings, Mr. Pigee "Poultry Hill";5 rings, and F. X. Ransdell "Red Scarf "; 5 rings.
Four rings for each of the following:
Flournoy Davis "White Scarf", F. M. Kerlin "Kentucky", W. C. McRae "Lake", W. H. Davis "Belle Meade", Mr. Higgins "Last Chance", W. H. Harvey "Don Carlos", & Hugh Montgomery "Desona".
And for each of the following: Jesse D. Tompkins "Black Cap"; 2 rings, George F. Blackburn "Shelburn"; 1 ring, and Robert Moore; 0 rings.
Best Time made was six and a quarter seconds by Knight of "Laura Lee", Mr. George Douglas of Tensas Parish. He also combined the best score and the best time, winning the 1st prize.
A most perfect horsemanship was noticed by Mr. Nolan Harvey of Madison Parish; and we cannot avoid expressing our admiration of the riding of the little boy, Master Hugh Montgomery, bareback and every other way, who took the four rings with the rest of them.
The evening programme opened with the crowning of the Queen of Love and Beauty, Miss Alma Egelly, Mr. George Douglas.
Mr. Archie Douglas placed a floral wreath aroung the brow of Miss Narcisse Williams (later Mrs. W. D. Brown) as first maid of honor; and Miss Emmy Richares was selected by Mr. Nolan Harvey as 3rd Maid of Honor, and the ball was then opened with the coronation.
At one time there were 105 couples on the floor moving around to the magic measure of D. L. Morgan's string band."
Posted by Sandra Guthrie Moore at 2:43 PM