John Millikin Is Now Considered Earliests of the Settlers 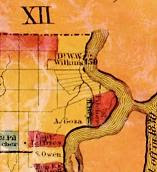 I have been informed that John Millikin was here since before 1812. Millikin held a Spanish claim for land in the very northeast corner of Louisiana. A conveyance stipulated a grant given by Gov. Bernardo de Galvez in 1776 for property on Lake Providence, that body of water had been known as Stock Island Lake until Millikin himself renamed in in 1813. From "Three Roads to the Alamo", by William C. Davis.
"Richard Millikin was a prominent citizen of Carroll Parish , Louisiana. He owned large amounts of property and a plantation. His wife was Margaret Shaw, whose family came from Southern Louisiana. They both died in West Carroll Parish, as far as I know, and are supposedly buried on their plantation located on Leggitt Crossing Rd. Twenty years ago there was a sign that said Millikin Farms at the entrance to the property. I also have no idea who their parents were or exactly where they came from.
Richard Millikin was born about 1795 South Carolina
Died - Aft Civil War and Bef 1880 - supposedly killed bycarpetbaggers
Married - 8 May 1845 East Carroll Parish, Louisiana
Margaret - Born - 1825 Louisiana
Died - Btwn 1880 & 1883 West Carroll Parish, Louisiana
Children:
James Shaw Millikin
Robert C. Millikin
Creed Tanner Millikin
Richard M. Millikin
John D. Millikin
Margurite Millikin
Only James Shaw, Creed Tanner, and John D. lived to adulthood and had families.
"My Great Grandfather's brother, James S. Millikin. I learned from a Louisiana history book that he rode with Quantrill's bushwhackers and was present at the burning of Lawrence, Kansas." TERRY JENSON
1830 Concordia
Millikin, John 0000000010000 0000000000000
Concordia, pg. 153
The map shown at the top is a plat map in 1848. The very northeast corner of Carroll Parish is the Millikin land. Top, of course, is the Arkansas line, and to the right is the Mississippi River.
Posted by Sandra Guthrie Moore at 2:31 PM