Stories from the book "A Place to Remember", by Georgia Pinkston
After the Governor's proclamation had been issued Mason and his gang were closely hunted by the whites and Indians and, having made some narrow escapes, they crossed the Mississippi to somewhere about Lake Providence in the then Spanish territory. Whether at L. P. (Spanish side of the river) or on the nearby Stack Island (in the river), Mason was in a position to flee easily into that part of the great Spanish wilderness which today is northern Louisiana and the southern part of Arkansas. There he could not only conceal himself more effectually, but also live with some confidence that the Spanish authorities would not attempt to capture him. According to some folks Mason crossed the Mississippi River and went westward to the highlands of northwest of Vicksburg, which are known to this day as Mason (Macon) Hills, and there hid some booty money, and to the present day, continues this chronicle, many people

believe that rich treasures lie buried out in the Mason Hills.
Mason spent much time at Palmyra and on Stack Island. Palmyra then, as now, was a very small settlement on the Mississippi, about 20 miles from Vicksburg. Stack Island (also known as Crow's Nest or Island No. 94) was washed away shortly after Mason's day. * It was on Stack Island, near the mouth of L. P., about 45 miles from Vicksburg, that we first hear of Mason, after organized bands began to search for him. At Stack Island laid his hand upon fate. The band robbed a traveler and found among his effects a copy of Governor Claiborne's proclamation.
Stack not long since was famed for a band of counterfeiters, horse theirves, robbers, murderers, etc., who made this part of the Mississippi a place of manufacture and deposit. From hence they would sally forth, stop boats, buy horses, flour, whiskey, etc., and pay for all in fine, new notes of the 'first water'. Their villanies (after many severe losses sustained by innocent, good men, unsuspecting the cheat) became notorious and after several years' search and pursuits of the civil law, and in some cases the "Club Law" against this band of monsters, they have at length disappeared. Dates of Mason's robbers were around 1800-1802.
Bunch, like other pirates (or criminals) flourished on the Ohio and preyed upon primitive commerce and traveled between Pittsburg, Pennsylvania, and the lower Mississippi. A look-out could detect boats long before boatmen--and many travelers were thus simply and easily 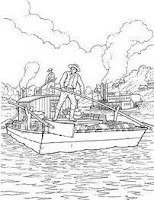 delivered into the hands of the banditti. The earliest travelers on Mississippi floated or propelled themselves with paddles and oars in small clumsy crafts.
The Bunch's Bend area got it's name from the pirate, where he had his headquarters in the early 1800's. These flat boats would travel downstream to New Orleans with goods, and he and his men would lay in wait to rob them. The pirates boarded the boats, killed the crewmen and took their boats and goods. If a crew was fortunate enough to get safely past the pirates to the trading post at the lake below, they thanked Providence for sparing them. Thus the lake and the settlement acquired the name Providence. Eventually a croup of Kentucky flatboat crews tited their boats together and floated past the Bend. When Bunch and his men boarded, the well-armend crews met them and slaughtered every pirate, making the river safe.
*NOTE: In 1818 Stack Island/Crow's Nest was sunk by an earthquake, or swept by the floods.
Posted by Sandra Guthrie Moore at 9:43 PM