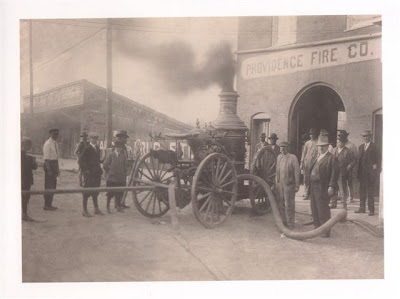 [Banner-Democrat, Dec. 9, 1893]
The Providence Fire Company No. 1 was chartered in 1870, by twenty-one prominent and public-spirited gentlemen of the town, among whom were Col. Morgan, C. A. DeFrance, and David Dreyfuss, the only surviving member we know of. In a few years, however, the Company dwindled down to a few active members, but in 1875 it was completely re-organized, through the efforts of Col. Morgan. In 1883, the Fire Company bought their fine stream fire engine, which they called, out of gratitude for their re-organizer, LADY MORGAN, after his little daughter Emma. The headquarters of the Fire Company were then and had been for many years in Simon Cohn’s Opera House a very unsafe and unsecure building, not at all in keeping with the Company, and new quarters were for years talked about, and would have continued to be talked about, had not the fate and much regretted Jason Hamilton and Col. Morgan taken the matter in hand, superintended and soon finished the building of the present Firemen’s Hall. Both Col. Morgan and Jason Hamilton, and long as they lived, were the promoters, organizers, and managers of the Firemen’s annual picnic on the beautiful Arlington grounds. The youth of this town, now young men and young ladies, were year after year drilled by Col. Morgan, and recited verses composed by him for the different May festivities. The May Day was a glorious day with Colonel and we shall long remember him as we last saw him on the stage, on the picnic ground, his white hair, and white beard, somber attire and beaming countenance presenting such a strange contrast with the children’s curly hairs, and bright costumes, and faces flushed with a first stage fright. The children enjoyed the day, the parents enjoyed it, the town and country folks enjoyed it, and happier than all was Col. Morgan, the promoter and leader of the May Day.