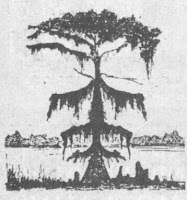 This old town has an interesting tale to tell
To our young folks and late comers here to dwell;
Mud huts and mounds prove the Indians had their day
Before the white man settled down to stay.
A pirate caused this town to get its site and name.
Bunch and crew were a gang that played a crooked game.
Robbed boats of goods and freight in spite of pleas and cries.
Escapees fleeing to a land nearby to save their lives,
Knelt to thank Providence for its kind intervention,
Stayed here, or moved on, with renewed intention.

Our first town was layed out by streets in 1833,
Not much of a town we all must agree.
Washed into the river by the year of 1866.
A new town arose with stores of wood and bricks,
The streets running north and south were only four,
Those going east and west were a few more.
Through LEVEE Street flowed the traffic of the town
With freight and passengers the boats brought down,
SPARROW, lawyer, jurist, Senator of State fame,
SCARBOROUGH, famous judge who left a street his name,
HOOD, Harbird and Govy, father and son, and other kin
Were here to help homes, churches, and schools begin.
DAVIS, a doctor who saved lives or sent them to heaven,
Streets, after LAKE and MORGAN, were numerals FIRST to SEVENTH.

Out in the middle of the street buckshot mud was two feet deep,
Water filled, bricked-in cisterns helped firemen fight the heat,
For sidewalks, long thick boards end to end were layed,
To protect boots and shoes of old and young, lad and maid.
Kerosene lamps on walls in stores and along the streets
Lighted the dark pathways for pedestrians’ hurrying feet.
Known far and wide as an important steamboat town,
The MARY KEENE, home-owned, was first to wear the crown.
For this town a steamboat has once been named,
Giving town and boat equal river fame.
Beautiful is our lake with its waters so blue,
Mile wide, six miles long, one of nature’s works to view,
A mirror for the heavens above and the brilliant sky,
A plat of serene loveliness to each passer-by,
A joy to boaters, swimmers, and those on water skiis,
Framed by stately homes and majestic cypress trees,
Scene for a painter, picture of God’s untouched beauty;
To keep it as such is man’s sacred duty.
It is the earth’s own glory made by God’s own hand,
We who live here prize it as an Eden of Louisiana land.
Maude Van Fossen
Posted by Sandra Guthrie Moore at 9:06 PM