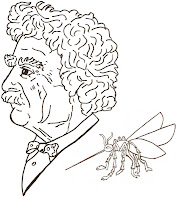 STACK ISLAND [some called it Stock Island]
"I remembered Stack Island; also Lake Providence, Louisiana--which is the first distinctly Southern-looking town you come to, downward-bound; lies level and low, shade trees hung with venerable gray beards of spanish moss; 'restful, pensive, Sunday aspect about the place,' comments Uncle Mumford, with feeling--also with truth.
... These mosquitoes had been persistently represented as being formidable and lawless; whereas 'the truth is, they are feeble, insignificant in size diffident to a fault, sensitive'--and so on, and so on; you would have supposed he was talking about his family. But if he was soft on the Arkansas mosquitoes, he was hard enough on the mosquitoes of Lake Providence to make up for it--'those Lake Providence colossi, 'as he finely called them. He said that two of them could whip a dog, and that four of them could hold a man down; and except help come, they would kill him--'butcher him,' as he expressed it. Referred in a sort of casual way--and yet significant way-- to 'the fact that the life policy in its simplest from is unknown in Lake Providence--they take out a mosquito policy besides."