This story from "Camp-fire Stories of the Mississippi Valley Campaign", by Marie Louise Benton Bankston
When General Grant and his troops seized Lake Providence, his scheme was to cut a canal between the Mississippi River up to the mouth of the Tensas Bayou so Federal boats could travel the rivers and reach below Vicksburg. The Northern officers were selecting mansions for their own selves. One of the stately mansions was of Colonel Warren Magruder Benton. The owner, being an elderly man, had taken his slaves and fine horses to his hill country refugee. The estates family portraits had been used as targets for camp amusement and the elegant furniture and everything within had been taken by marauders and destroyed while they were looking for hiding places of the owners' money or treasures. Soon the Federals found Warren M. Benton's retreat. They grabbed him and placed a noose around his neck all the while he was protestesting the whereabout of any hidden treasure or money. He was subjected to many indignities. Mr. Benton's foreman and 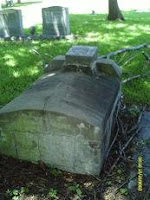 confidential servant, Henry Bates, ran up to the looters as they were in the midst of suspending their victim from a tree. The man crying "For God's sake, don't hang my old Masrst! Take me; I am the man that buried the money!" The slave removed the rope from around his master's neck, placed it around his own, and said to the soldiers: "Easter, the house-woman, knows where I buried the box, and the General himself has Old Marster's money." The mauraders rode away disappointed. The servant told his old master "Don't trouble, Marster. General Grant just got the Confederate money and the silver we used at the parties. Our family silver and our gold is hid away under Ole Miss' tombstone in the family burying ground." And there it was found.
Posted by Sandra Guthrie Moore at 2:03 PM