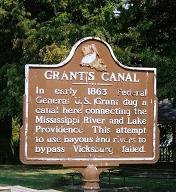 NOTE: [AT BOTTOM OF THIS POST]
On May 1, 1862 New Orleans was occupied by the Federal Forces. Cotton bales all along the Mississippi River from Baton Rouge to L.P. were being seized and burned by the order of Governor Thomas O. Moore.
While in an attempt to take Vicksburg in June of 1862, Union forces occupied a portion of Madison Parish opposite Vicksburg for over a month. Swamp fever, extreme heat, and stomach disorders drove them to Baton Rouge.
In trying to capture and control Vicksburg, General Grant sent General William T. Sherman to Milliken’s Bend, December 25, 1862, with 30,000 troops. The naval convoy slipped past Providence the night before. (An alert telegrapher named I. I. Daniel, stationed at Point Lookout south of Providence had seen the convoy… see “The Carroll Telegraph” on this website). Sherman stormed the bluffs north of Vicksburg but sustained heavy losses and returned to Milliken’s Bend.
General A. J. Smith had debarked at Milliken’s Bend early Christmas morning surprising the Confederate outpost there. The Southerners fled inland evading capture. Captain Harper’s company hid in the swamp. Union troops cut telegraph and rail lines, a small detachment went on to Delhi burning bridges and the depot there. Reference: Georgia Pinkston’s book “A Place to Remember”
“There were raiders from west of the Bayou Boeuf going to the aid of their neighbors on the Big River, according to Frederick Williamson’s "History of N. E. La.". In the "Monette Diary" we find this notation “Aug. 29, 1862, Captain John McKoin and his Rangers left for Lake Providence today to help the people drive out the raiders.” Reference: Florence Stewarts McKoin’s book “Between the Rivers”
CARROLL INVADED & OCCUPIED BY THE FEDERALS
REGIMENTS IN THE CARROLL PARISH AREA
THE CANALS 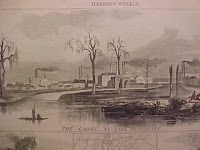 On January 29, 1863 General Grant arrived in Young’s Point, Louisiana. His project was to dig a series of canals to connect to the Miss. River .
Some Carroll and Madison residents refugeed to Texas.
Grant organized his army into 4 corps:
General Sherman and his 13th Corps’ attempt so that troops and supplies could be sent safely below the guns of Vicksburg, was abandoned when a flood ruined the canal and almost drown Sherman’s men.
Up river at Ashton (just below the AR line where the Macon River came within three miles of the Miss.) McPherson decided to cut the levee so the flood waters would make a natural passage for the gunboats to the Macon River. The countryside overflowed by never reached deep enough to be used.