This letter was written in 1928 by Sarah "Sallie" Benton Powell to the 6th grade class of Mrs. Margaret Newman.
"Dear Children of the 6th Grade:
Away back in the year 1853 there was born on a big plantation on the Mississippi River, 6 miles below Lake Providence, a baby girl who will be 75 years old on Dec. 25, so you see, this little girl was a Christmas gift. (Father Warren M. Benton, Mother Miss Royall) The plantation was called Woodstock, owned by Colonel Warren M. Benton, who was an early settler here in Louisiana; coming with his slaves from Virginia. My earliest recollection is of a big mansion house much on the order of Arlington, and a big yard whose back gate opened on a long street, with the houses of the slaves on either side, and the home of the overseer at the end. Right beside this house was the big plantation kitchen, presided over by Aunt Ailsy, one of the finest Christian characters I have ever known. She was to my childish mind the sum total of all goodness, and I never had reason to change my mind through many long years of acquaintance with her.
My mother died when I was only 9 months old, and I, with a sister 4 years older (Mary Louise Benton), fell to the care of our good and trusted slaves. My father bought a slave woman to care for me, and who gave me her entire services, and her memory is with me to this day. I gave her all my baby love, and called her "Mammy". When my sister was 6 and I only 2, we were sent to boarding school at Dr. Hagaman's Academy; a large 3 story brick house situated about where Hagaman's break now is; as small as I was, I remember sitting on a a little stool at Mrs. Hagaman's feet sucking my thumb because I had nothing else to do, I do not know just how long we stayed at the Hagaman School, but several years, I think. One weekend we were taken home as usual, when my black mammy took me in her arms crying and rocking to and fro, saying they are going to take my baby away from me, which I finally understood to mean that I was to have a new mother, which event came to pass shortly afterwards. My father had gone back to the land of his birth and married a lady from Lexington, Kentucky. It was the custom for the planter's families to go away for the summer, leaving the plantation in care of the overseer, and ours was no exception. 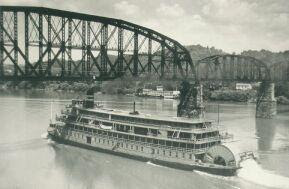 I distinctly remember the palatial steamboats stopping at the plantation landing, all all going aboard for our outing to some Springs, or to our old "Kentucky Home", where my grandmother still resided until she wasl 96 years old. I recall this was the time when hoopskirts were in vogue, and I, in common with all well dressed children, had one. I can see with my mind's eye 6 or 8 little tots skipping up and down the cabin of the boat flirting our hoops out behind.
Just before the beginning of the Civil War, my sister and I were placed in the Catholic Convent of Nazareth, Kentucky, where so many southern girls were educated, and where we remained, with the exception of summer vacations, until the Civil War was over. When we came back, what had been home, was now a place of desolation and despair. In the time of our absence, the enemy had destroyed my father's home, burning everything they could not take away, even to the gin, cabins and fences. My father was too old to serve in the army, and had taken his negroes to a place he owned in the hills (near what is now Oak Grove (then, Pin Oak)) but left a few trusted slaves to guard the plantation.
(See Mary Louise Benton's story "The Faithful Servant")
.... When we returned home, the negro who had been liberated was dominant in politics, being upheld by the power of the Federal government.
A former slave called Judge Clay was among those in power, and held the place of superintendent of schools. My sister, who had married Major Garner, a handsome and gallant soldier of the Confederacy who had died of the wounds received at the seige of Vicksubrg, was left a widow with 1 little boy; she went to Clay and asked for a school for the white children. He replied that no one had asked for a white scholl and there was no appropriation for housing the school, and no teacher. She told him she would provide both house and teacher, which she did in the house now occupied by Mr. Roy Powell (later the home of the Marron Family), which was her home as well as school. The school was very small, gradually growing in numbers as the white people became more reconciled to their children attending "charity" schools, as it was then thought of, no one dreaming of the development of our great public school system as we have it today. This 1st school was started in 1876 or 1877, as nearly as I can remember." ....
(see story "The 1st Public Schools", by Sallie Benton Powell)
....."Now in order show you how time has changed as to manners and customs in the long years that have intervened since the days of my youth, I will tell you of two circumstance that I recall as illustrating what I mean. The 1st public party that I was allowed to attend was given in town; I had a date, as you say, with a young man to ride into town in a buggy (if you know what that is). In those days no young lady went to public places without a chaperone. As I had no older person to go with me, my father attended me to the party, riding horseback behind the buggy, although at that time he was 75 years old, and afflicted with rheumatism. So you see how important it was thought to guard a young girl in everything she did.
Another time my sister and I were in the carriage about to start to town, my father came to the carriage and said, "my daughter, where are your gloves and veil, no lady appears in public without them"; so I had to go back to the house and adorn myself as become a lady of that time."
(s)Sallie Benton Powell
Lake Providence, La.
Dec. 7th, 1928
Posted by Sandra Guthrie Moore at 8:30 AM