From "A Place to Remember", by Georgia Payne Durham Pinkston
"The troops of General McPherson and Ransum were stationed in Mrs. Seller's yard (Oakand Plantation), and Mrs. Elizabeth Sellers, who was a strong-minded , courageous woman, whose hot Southern blood made her dare and do many things, would stand on her balcony and make speeches to the soldiers whenever she had an opportunity to do so, encouraging them to desert. And as the soldiers were in rather a demoralized state, they were in a condition to be influenced by her. General Ransum, getting wind of it, wrote to her, "that if she repeated it, he would put her out of the lines." She replied: "Sir, your cause must be very weak, if you fear what a woman can do!"
On another occasion, Mrs. Sellers, standing on her balcony, saw a handful of Confederate scouts, ragged and forlorn, fleeing for their lives, pursued by a company of Kansas Jayhawkers, headed by the famous Union spy and officer, Phil Taylor (who became well-known to the citizens here after this episode). Mrs. Sellers rushed to the gate, threw up her arms, and as the column halted, asked: "Are you western men? Are you western men? Then you should never take up arms against the South. The interest of the West and South are identical and they should stand 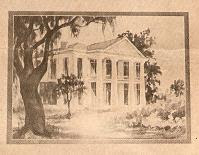 together." The officer did not perceive the ruse until the Confederates had had sufficient time to make good their escape, when he drew his sword and said, "Forward men, forward." So a woman's quickness of thought saved those scouts' lives that day."
[NOTE: In my research I found that Elizabeth was born in Pennsylvania, and died shortly after the Civil War, in 1867]
Posted by Sandra Guthrie Moore at 9:00 AM