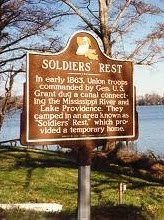 Nov. 18, 1965 East Carroll Democrat Newspaper by Unk Nook Hello Folks, I am going to share a secret with you but you must not tell a soul. I am going to tell you how Soldier’s Rest got its name and how much the name cost. Before the day it received its name it was just called the sage field. The sage field began at what is now Milligan Street and went one block west of what is now known as Artaud Street. The soldiers were just beginning to draw their pensions from the government and a man named John Stockner bought a lot on the corner of Milligan and Second for $5 to build a house on---then the lots in the sage field began to sell like hot cakes on a winter day--each lot sold for the sum of $5.00. The lots sold faster than the surveyors had a hard time keeping them measured. All kinds of houses were erected on these lots in the sage field, some of brick, some of wood, some of tin - anything that a house could be built from. Some of them fell down before the occupants could move in good. Now, back to the naming of Soldier’s Rest -- it all took place in my pop’s butcher shop one Wednesday before Thanksgiving in 1904 - the Real Estate dealer was in the shop having a beef cut up (the agent that was selling all the lots in the sage field). One of my little pals and I were rehearsing our Thanksgiving speeches by reciting to one another as were both on the Thanksgiving program at the school house that evening. The real estate dealer overheard us rehearsing and asked my pal, named Norman to recite his speech to him. Norman expanded his chest and began-- “Soldiers Rest, Thy warfare is over, Dream of battlefields no more”... etc, etc, etc.. The real estate dealer like the sound of it so much that he promptly named the sage field “Soldier’s Rest”, and paid Norman by sharing his peanuts and raisins with him. In those days a five cent bag of peanuts and raisins filled a 1 pound paper bag so Norman and I went to school the next morning well fortified with the “pay” for naming Soldier’s Rest. B C ing you, Unk Nook PS I think this was a joke that he was telling, but not for sure... what do you think?
Posted by Sandra Guthrie Moore at 6:38 AM