Brothers Nathaniel and Joseph Kerr, from L.P., died at the Alamo

Amelia Williams compiled about 400 names of persons to have fought at the Alamo, but contemporary authority has practically agreed that the number of Alamo victims that had fallen at the fortress on March 6, 1836 was less than 200.  So Amelia set out on a task to verify every name on this inclusive work list and ended up with what was finally determined was "A critical study of the seige of the Alamo of the personnel of its Defenders", by Amelia Williams.
On this list was two brothers, Joseph Kerr and Nathaniel Kerr.  "Joseph Kerr, age, 22, private, from Lake Providence, Louisiana.  Sources: Nacogdoches, 417; Affidavits of S. L. Chambliss and Mary E. Martin, on January 9, 1875 among the Adjutant General's Misc. Papers, Texas State Library. (18)"
Nathaniel was in the same company.
Below is taken out of "Southwestern Historical Quarterly", XXXVI, page 278, foot-note No. 61, (18). [Picture is of Joseph and his wife, Elizabeth Cubbage Kerr] 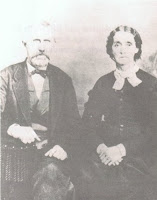 "On January 9, 1875, before Robert W. Walton, Notary Public of Navarro County, Texas, S. L. Chambliss swore that on or near the first of February, 1836, he as captain of the Louisiana Volunteers for Texas Independence, honorably discharged Nathaniel and Joseph Kerr from his company because of the disability of their horses.  He sent them to join the Texas troops at San Antonio, Texas.  He further swore that their names appear as citizens of Bexar County on abstracts of land cetificates, bugt says that is a mistake, for they were volunteer soldiers from Louisiana fighting for Texas independence, and that they fell at the Alamo.  On the same day and before the same Notary, Mary E. Martin swore that in February, 1836, she saw and read a letter, written to General Kerr of Lake Providence, Louisiana, by his son, Nathaniel Kerr, who was then stationed at the Alamo in San Antonio.  In this letter Nathaniel Kerr stated that he and his brother, Joseph, were honorably discharged from their original company in the Texas service, on account the disablilty of their horses and that they were then stationed at the Alamo.  It was later believed by all their friends that both brothers had died at the Alamo.  Both these men were unmarried, and their heirs were a niece, Harriet Kerr Davisson, and a nephew, James D. Kerr.  In their Power of Attorney, made February 24, 1855, the claimants state that Nathaniel Kerr had died from a sudden disease at the Alamo on February 19, 1836."  These warrants were granted by Barnard E. Bee.


Posted by Sandra Guthrie Moore at 9:57 AM