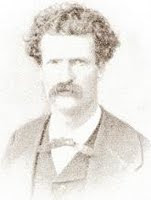 Mark Twain says in his book about how bad the mosquitoes are at Lake Providence, "--'those Lake Providence colossi, 'as he finely called them. He said that two of them could whip a dog, and that four of them could hold a man down; and except help come, they would kill him--'butcher him,' as he expressed it." He referred to the town as Stack Island.

JIM BOWIE
During the Spanish regime, large land grants were made to favorites of Governor Miro. Two such tracts were granted by him to Juan Gonzales in 1787, and one tract to Miguel DeSanto in 1788. (below the town of Monticello, LA.). Gonzales and DeSanto sold these tracts to James Bowie on July 10, 1827, according to records in Wachita office (East Carroll then being a part of Ouachita Parish). These land grants later bore the name Crow's Roost Plantation.
Other Bowies mentioned living in the area, from 1831 to 1851, and a succession in 1870. John Jones Bowie bought land during August 1843, now bearing the name Bowie Plantation, which is located on LA. Hwy. 134. John was first married to American Ann Watkins, they had a daughter named Harriet (now Mrs. Joseph C. Hollingsworth. His 2nd wife was Mary C. Oliphant, who made a bequest in 1851 while she and John J. Were living at Ashton Plantation. Jim Bowie's brother, Reason Bowie and his wife Nancy Lattimore Bowie and their descendants have left their family names and records for some one hundred and twenty-five years. The last parish record of Nancy Lattimore Bowie concerned her sale of property to Hiram R. Lott in the 1870's.

Emanuel Stance
Emanuel Stance joined in the Post-Civil war Oct. 2, 1866, in Lake Providence, La. He was 19 and his occupation was sharecropper. He was in Company F of the 9th & 10th U. S. Cavalry and also the 24th & 25 U. S. Infantry. These four regiments, former slaves became known as the "Buffalo Soldiers". He was said to be bright-eyed, hardnosed, intelligent, well-spoken and wiry, but only stood a little more than 5 feet. He joined the rest of the green recruits of the 9th Cavalry at New Orleans where he trained for 6 mo. In 1866-67, the organization of the regiment was put into

high gear, and by the end of Feb. Stance had been promoted to corporal and transferred to Carrollton, La.
In June, Stance's Company F was among six companies of the regiment transferred to Fort Davis, Texas. In July, Stance was promoted to sergeant. That December, a detachment from Stance's company saved a stage attacked by 100 Mescalero Indians. In driving off the attackers, the Buffalo Soldiers lost one private and three horses.
In January 1868, Company F completed a change of station to Camp Quitman, which would later become Fort Quitman. That month, the company was among those besieged by a large band of Indians, Sixteen attacks were repelled by the men of the garrison.
On September 14, a detachment from Company F was among 60 members of the 9th Cavalry to successfully carry off a surprise attach against 200 Indians near Horsehead Hills. The Buffalo Soldiers killed 25 Indians, wounded many more, and captured 200 horses and a large amount of winter stores. Only one soldier was wounded in the fight. Some months later Company F was transferred again, this time to Fort McKavett, Texas.
On September 16,1869, a detachment from Stance's company, along with detachments from three other companies, skirmished with some 200 Comanche and Kiowa on the Salt Fork of the Brazos River. In an eight-mile running fight, three Buffalo Soldiers were wounded while the Indians suffered 25 casualties. After being reinforced by another detachment from their regiment, Stance and his unit again skirmished with the Commanche-Kiowa party on the 20th and 21st.
In 1870 Emanuel Stance received the Medal of Honor, but his discipline problems plagued his long military career. 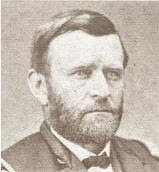 In early 1863 he ordered his Federal troops to dig a canal to connect Lake Providence to the Misssissippi River so their gunboats could travel through the Tensas and other bayous & streams and bypass Vicksburg in this canal. On February 5, 1863, General Ullyses S. Grant came to inspect the work of the canal. While at Lake Providence he was headquartered at the Arlington Plantation, plantation home of Gneral Edward Sparrow.
The attempt of the canal failed. (from "A Place to Remember", Pinkston)

deserted home of Dr. Matthew B. Sellers.
McPherson worked on another canal experiment at Ashton Plantation, just below the Arkansas line where the Macon came within three miles of the Mississippi River. Blasting several holes in the levee sent floodwaters through the countryside, but the water never reached sufficient depth to be used. By March 15th the task was completed, laborers cut 2 thirty foot trenches through the levee flooding the town of Providence. The Union troops moved to Berry's Landing about 5 miles north, McPherson reporting to Grant that the small steamboats now on the lake could navigate through Baxter Bayou and into Bayou Macon.
Posted by Sandra Guthrie Moore at 5:30 AM