WILLIAM CLARKE QUANTRILL
Born on July 31, 1837, in Ohio, to Thomas Henry and Caroline Cornelia (Clarke) Quantrill, the boy displayed his cruel tendencies even as a child. Purportedly, this bad seed would shoot pigs through the ears just to hear them squeal, nail snakes to trees, and tie cats’ tails together for the pure joy of watching them claw each other to death. C. S. A. guerrilla. After a year, he moved to Lawrence, Kansas, 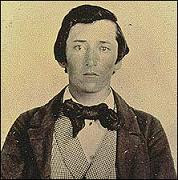 where he was again a schoolteacher from 1859 to 1860. It appears that after being a schoolteacher for several years, he travelled to Utah in 1858 with an army wagon train and there made his living as a gambler, using the alias of Charles Hart.
But his past and predisposition soon caught up with him and, wanted for murder and horse theft, Quantrill fled to Missouri in late 1860.The gang stayed around Carroll Parish, off and on for several years because of it's isolation and it's vast swamp lands, and because the Younger Brothers hung out sometimes with their relatives that lived in the Delhi area.
The climax of Quantrill's guerilla career came on August 21, 1863, when he led a force of 450 raiders into Lawrence, Kansas, killing 183 men and boys, dragging some from their homes to murder them in front of their families, and set the torch to much of the city.
Quantrill eventually ended up in Kentucky where he was killed in a Union ambush in 1865 at the age of 27.

YOUNGER BROTHERS: Cole, James, Robert, and John
Younger Brothers
The Youngers visited their sister on the Eddins place south of the Bayou Macon Church. Their sister, Mary Josephine "Josie" Younger was married Captain Jarrettte, on May 8, 1860, in MO., [John Jarrette (or Jarrett or Jarett) born ~1836 in Kentucky] Jarrette's pre-war occupation was a carpenter.

ROBERT EWING YOUNGER
Born December 1853 in Missouri. Too young to have been an active war participant. Sentenced to life in prison for the Northfield robbery and murders. Died of consumption in prison in Stillwater, Minnesota September 16, 1889. 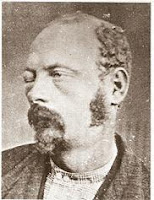 JAMES HARDIN YOUNGER
James was born January 15, 1848 in Missouri, joined Quantrill's guerrillas late in the war, captured with Quantrill in Kentucky and sent to Alton prison as a POW, paroled from there. Was deputy sheriff of Dallas Co., Texas 1870-71. Sentenced to life in prison for the Northfield robbery and murders. The 1900 census listed him as "farmer". James killed himself in St. Paul, Minnesota October 19, 1902, not long after being paroled from prison.

JOHN YOUNGER
Born 1851 in Missouri. At age 15 killed a man in January 1866 in self-defense. Early in 1870 lynched and badly hurt by a posse seeking information about Cole. Indicted for murder in Texas in January 1871 for killing a deputy sheriff who was attempting to arrest him. Killed by Pinkerton agents March 16, 1874. 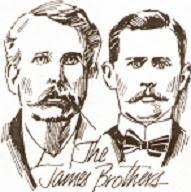 They became fugitives from the law at an early age before the Civil War. Their mother's farm had been mortgaged to the local bank and the family was having a difficult time in meeting payments. An agent wanted the right-of-way across the farm and was trying to get Mrs. James and the boys to agree. They refused, and the bank foreclosed, but the boys trying to defend they property when Frank was shot in the leg. The family being infuriated by the invasion of their rights, swore revenge on everyone involved, and in one way or another their oath was carried out.
Floyd, La. believes that much credit goes to the guerrillas and the Home Guard. It seems that the James Brothers & Younger Brothers had a stake in the territory, Jesse owning a home in Floyd, and the brothers are said to have a sister that lived near Delhi, La..

ALEXANDER FRANKLIN JAMES
was born January 10, 1843 in Missouri. He was a step-son 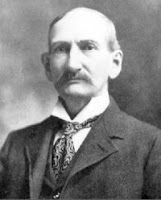 of a doctor turned farmer by the name of Reuben Samuel. "Frank was a shy man but very talented in telling children stories about bank and train robbers. There were those who believed he was telling of his experiences in disguise." (from "Between the Rivers", by McKoin) Frank James was treated by Dr. Vinson once for a gunshot would and both brothers for malaria.
Frank was one of of Quantill's guerillas. He married Annie Ralston in June 1874. (Buel says Sept. 1875 in Jackson County). One son, Robert Franklin James born February 6, 1878. Frank, Sr., died on February 18, 1915.

JESSE WOODSON JAMES was born on September 27, 1847. "Jesse was a good dancer and very popular amoung the ladies. He was courteous and had good

manners at all times around the ladies: but, always danced with his pistols on his person." (from "Between the Rivers", by McKoin)
Jesse joined Quantrill late in 1863 (after the Lawrence raid). Badly wounded in the right chest in 1865 while attempting to surrender to the Federals (the injury played a factor in both his potential participation in some robberies, as well as identifying him later). He was living under the name of Howard in Missouri. He married Zee Mimms April 24, 1874. Two surviving children, Jesse Edwards James and Mary (Zee and Jesse had twins who did not survive infancy, ~1878). Killed in his home by a member of the family, Robert Ford, to receive the $5,000 reward, dead or alive, on April 3, 1882.
Posted by Sandra Guthrie Moore at 9:54 AM