Hunters In & Around Carroll Parish 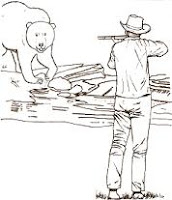 The following information comes from "A Place to Remember", by Georgia Payne Pinkston and/or "Between the Rivers", by Florence Stewart McKoin, from via the internet, and from President Roosevelt's Memoirs. (sketch by Sandy Moore)

Joe Demsey
One of the earliest settlers was the Dempsey family that was reported to be living on the lake in 1813. They raised corn and other produce. Joe Dempsey, hunted along the banks of what is now called Joe's Bayou, which was named for this early hunter.

Ben Lilly
Benjamin Vernon Lilly (1856 - Dec. 17, 1936) whom lived near Mer Rouge, was a cotton planter, was one of the most experience hunters & guides in the country. When Teddy Roosevelt came to the Louisiana swamp country to hunt big game Lilly along with

other notorious hunters (several listed below) camped east of Floyd, La. on Bear Lake across Bayou Macon. The President was really taken with Lilly, and took Lilly with him to Africa after his hunt in La. Mr. Lilly was fond of making and polishing blowing horns out of cattle horns; his signature was in the form of a honey bee and the lilly flower. He was a frequent visitor to Henry Stevenson's father's home in northeast Louisiana. Lilly was very religious and would not hunt on Sundays.
Jan. 1893~"Nimrod Lilley, the successful bear hunter, was in town this week." (L. P. newspaper)

Holt Collier
Hotl Collier had been born a slave on the Hinds Plantation. His father was the "Old General Hind's" body servant when he fought under Jackson at New Orleans. Holt was 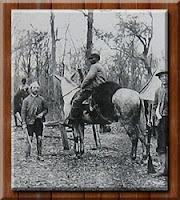 the General's young son's body servant, and when young Hinds went hunting Holt would follow along with him. Holt killed his 1st bear when he was 10 years old. When the young Hind's went off to the Civil War so did Holt travel with him. Collier became a sharp shooter against the Union troops. When his master died he was adopted by the Metcalfs.
Holt Collier had a real good bear dog. The President decided to call on this man and asked to borrow his dog. Collier said "No sir, I do not loan my dog to anyone. The only man who could get my dog would be the President of the United States, I think that much of my dog." President Roosevelt replied, "You are talking to the President", Holt could hardly believe his ears, but was convinced and joined the hunt.
When Holt Collier was chosen to guide President Theodore Roosevelt on the now famous bear hunt of 1902, he was a legend in Mississippi. He had cut roads into the wilderness and was known to have killed in excess of 3,000 bear. Theodore Roosevelt had Holt Collier become a noted hunter by founding the Boone & Crockett Club and hunting almost all types of American game including grizzly bear, buffalo and pronghorn sheep. He desperately wanted to experience the thrill of the mounted bear chase. Though Roosevelt and his company had immeasurable finances and manpower, almost every aspect of the hunt was the responsibility of the uneducated 56-year-old Collier. He found a site on the banks of the Little Sunflower River in Sharkey County, about 15 miles west of the Smedes Station, a small farming platform.
President Roosevelt wrote that "Collier had the dignity of an African chief and for half a century had been a bear hunter, having killed or participated in the killing of over 3,000 bears."

Teddy Roosevelt
One trophy that eluded him was the Louisiana Black Bear. He desperately wanted to 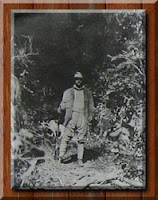 experience the thrill of the mounted bear chase.
A presidential train rolled to a halt on a railroad spur one mile north of Sonheimer on the evening of Oct. 5, 1907. President Theodore Roosevelt prepared to rendezous with his old friend, Ben Lilly, for a bear hunt in the Tensas-Macon Swamp. (at O'Hara's Switch which was changed to Roosevelt years later) The President had good guides and hunters with him. Mr. Gaddis and Mr. Guier had their pack of bear dogs there. His group moved to another area in northeast Louisiana where he got his black bear.

Clive Metcalf
"Clive Metcalf and I", said President Roosevelt, "rode off between two of the canebrakes. We heard yelling & cheering of Harley Metcalf and Tom Osborn when we heard the lead dogs come to bay in the thickest of cane. Clive Metcalf a finished bear hunter, determined the bear's likely course and we went to the spot where he thought the quarry would be, the bear was coming straight towards us. I fired for behind the shoulder. He fell dead. Clive wound his horn to summon the other hunters."
John A. McIlhenny
"John McIlhenny killed a she-bear on his plantation at Avery Island in 1906." stated President Roosevelt.

Other hunters mentioned being with Teddy Roosevelt during his hunts in the Carroll area are:
John M. Parker
Dr./General Rixey
Dr. Alexander Lambert
Randall L. Vining
Simon Richburg
Ichabod Osborn, & son, Tom Osborn joined President Roosevelt in his bear hunt. They were two La. planters with 2 staunch bear dogs. Ichabod's father had taken up the plantation upon which they were now living in 1811. Young Osborn was now 3rd in line from fatther to son who steadily hunted bears in this immediate neighbor."
Tom Gaddis, of Pioneer was a bear hunter. He kept a pack of bear & deer hounds penned behind his house. "He would take his hunting horn that had been slung across his shoulder, blow a long blast followed by the short ones. In the meantime a Negro had relased the dogs and the whole pack came yapping and jumping at the horse."
"The only bear meat I ever ate was killed by Mr. Gaddis in the Tensas swamp."
"I have shared deer meat from the Bob Guier hunt several times. My father killed both deer and wild turkey."
"Mr. Gaddis & Mr. Guier had the unique experience of hunting with their famous neighbor from across the river, Ben V. Lilly."
"Bejamin Roberts, dealer in real estate in the 1850's, a planter, a civil and church leader as well as a hunter & woodsman."
"Henry Stevenson and John Austin went turkey hunting one spring, going deep into the Boeuf River forest in order to kill squirrels for supper, killing quite a few."
"Robert Stewart and Pete Rodriques heard a panther one night while on a spring turkey hunt near Boeuf River. Robert Stewart could imitate the turkey call. He could attract both the old gobblers & the hens."
"Judge Hennigan, a Negro, and an Indian went hunting for deer one Saturday morning. Agreeing to separate and meet again after an hour or two, the Judge and Negro met up and waited for their friend, the Indian, but he did not appear. They circled back the way he was to have come and found him dead under a large tree. His jugular vein had been severed and apparently his blood sucked out. They believe a panther had sprung out of the big tree onto his back taking him by surprise, and killed him before he had a chance to defend himself."

Hunters mentioned in "Murder, Mayhem, & Misc.", by Sandy Schmitz Moore
"Billy Alexander, who, by-the-way, is quite a Nimrod, and the acknowledged champion shot in the country, killed a very large fat bear last week in the swamp back of "Middlesex Plantation" in this county. It's gross weight was about 700 pounds. The net weight 465 pounds. One half of it sent to Vicksburg, sold for $72." .... We are under obligations for that 'bar' oil, Billy.
Nov. 1883 ~
"Urias Conn will give an entertainment which will be a game supper, and dance, tonight at the Jenkins Store on Levee Street. Rias is a great hunter and we have no doubt, his tables will be filled with all the delicacies of the season, among which will be found wild turkey, duck, quail, squirrel and the most delicious of all wild meat, good bear."
Oct. 1884 ~ "Urias Conn is decidedly, the best hunter in this country and cannot be excelled in many other sections. A few days since while hunting with his Winchester Rifle, he came on a flock of three deer and they dispersing in various directions, he killed them all by three several shots from his single gun. This was remarkable shooting, showing great coolness of judgment and precision of aim. These make up the number of fifty-two killed by him with this rifle."
Nov. 1893 ~
"The hunters are now after ducks. Mr. John R. Keller killed 25 on Sat. last."
"Mr. John Ikerd killed a large buck on Friday last, which weighed when dressed it, 175 lbs. On Saturday Mr. John Keller with Mr. Ikerd killed another, but not so large as the first one. These gentlemen are 1st Class hunters and hardly ever do into the woods without getting a deer."
Posted by Sandra Guthrie Moore at 5:54 AM