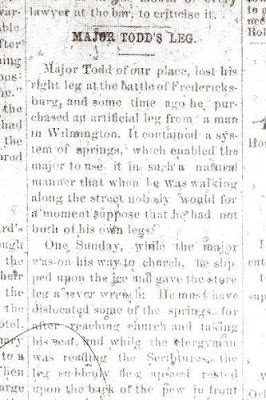 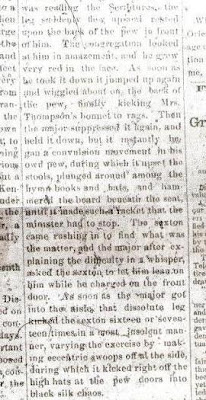 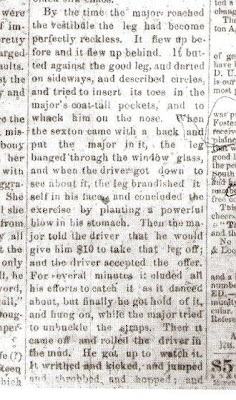 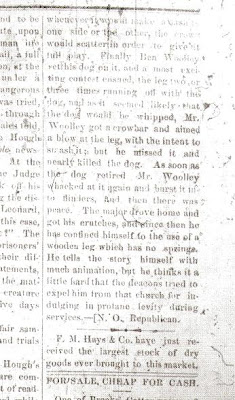 Sketch by Sandy Guthrie Moore.
This story came out of the New Orleans Republican, and then on July 8, 1875 was placed in the Carroll Watchman, of Carroll Parish, La.

"Major Todd of our place, lost his right leg at the battle of Fredericksburg, and some time ago he purchased an artificial leg from a man in Wilmington. It contained a system of springs, which enabled the major to use it in such a natural manner that when he was walking along the street nobody would for a moment suppose that he had not both of his own legs.
One Sunday, while the major was on his way to church, he slipped upon the ice and gave the store leg a severe wrench: He must have dislocated some of the springs; for after reaching church and taking his seat, and while the clergymen was reading the Scriptures, the leg suddenly flew up and rested upon the back of the pew in front of him. The congregation looked at him in amazement, and he grew very red in the face. As soon as he took it down it jumped up again and wiggled about on the back of the pew, finally kicking Mrs. Thompson's bonnet to rags. Then the Major suppressed it again, and held it down, but it instantly began a convulsion movement in his own pew, during which it upset the stools, plunged around among the hymn books and hats, and hammered the board beneath the seat, until it made such a racket that the minister had to stop. The sexton came rushing in to find what was the matter, and the Major after explaining the difficulty in a whisper, asked the sexton to let him lean on him while he charged on the front door. As soon as the Major got into the aisle that dissolute leg kicked the sexton sixteen or seventeen times in a most insolent manner, varying the exercise by making eccentric swoops off at the side, during which it kicked right off the high hats at the pew doors into black silk chaos.
By the time the Major reached the vestibule the leg had become perfectly reckless. It flew up before and it flew up behind. It butted against the good leg, and darted on sideways, and described circles, and tried to insert its toes in the Major's coat tail pockets, and to whack him on the nose. When the sexton came with a hack and put the major in it, the leg banged through the window glass, and when the driver got down to see about it, the leg brandished it self in his face, and concluded the exercise by planting a powerful blow in his stomach. The Major told the driver that he would give him $10 to take that leg off; and the driver accepted the offer. For several minutes it eluded all his efforts to catch it as it danced about, but finally he got hold of it, and hung on, while the Major tried to unbuckle the straps. Then it came off and rolled the driver in the mud. He got up to watch it. It writhed and kicked, and jumped and throbbed and hopped; and whenever it would make a dash to one side or the other, the crowd would scatter in order to give it full play. Finally Ben Woolley set his dog on it, and a most exciting contest ensued, the leg two or three times running off with the dog, and as it seemed likely that the dog would be whipped, Mr. Woolley got a crowbar and aimed a blow at the leg, with the intent to smash it; but he missed it and nearly killed the dog. As soon as the dog retired Mr. Woolley whacked at it again and burst in into flinders, and then there was peace. The Major drove home and got his crutches, and since then he has confined himself to the use of a wooden leg which has no springs. He tells the story himself with much animation, but he thinks it a little harsh that the deacons tried to expel him from that church for indulging in profane levity during services."--[N. O. Republican]
Posted by Sandra Guthrie Moore at 6:14 PM