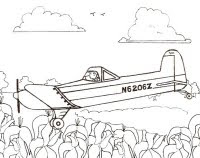 In 1951, the Police Jury financed an airport, located about 2 miles east of L. P.. The first airport was the L. P. Flying Service, or "Fleeman's". Buddy Guthrie started working there in 1955, and John Edwards and Steve Guenard had an office and hangar there and helped keep the runway in usable condition. Roy Sanchez worked at the airport also.
Other pilots having a hanger there were: Charlie Davis, Buzzie Tomlinson, & George Shepherd.
Gene Wilson had an airport out Hwy 38, toward Delhi, La., that was located beside the Bayou Macon. Buddy Guthrie [late 50's - early 60's] was one of the crop-dusters there.

Charlie Davis had an airport on the other side of the lake near the beginning of the "shoot" of the lake. Some of the crop-dusters working out of here was Gene Vyvial and his brother, Buddy Guthrie [mid 60's], and Charlie Davis also.
Charlie Davis was just one of the many crop-duster that was killed doing what they loved to do, FLYING.
Posted by Sandra Guthrie Moore at 4:56 PM