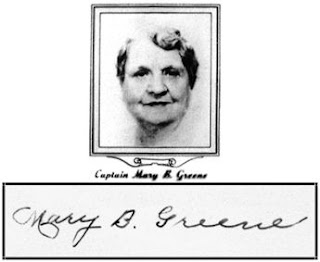 (from “Old Man River”, by Maude Van Fossen, newspaper article from 1980‘s)
In the course of time there were four women steamboat captains on the Mississippi River; Captain Callie French of the New Sensation, Mary Miller of the Saline, Mary Becker Green of the Greenland, and Blanche Douglas Leathers of the Natchez VIII.
No women’s lib, but there was keen completion and jealousy among the women captains. Capt. Mary Miller claimed to be the first but was challenged in later years by others. She got her Captain’s license on Feb 18, 1884.
Captain Callie Leach French or “Aunt Callie”, as she was known, was the genuine article, a bell-ringing, horn-tootin’, wheel-turnin’ captain!, was said by one of her examiners, Capt. O’Reilly. On the river she was captain and pilot from 1888 to 1907; but she also cooked, mended, nursed, acted, wrote gags, never lost a boat or had an accident! She handled boats, crews, actors, audiences, storms, floods, feasts and famines, with equal ease. Through it all, her strongest words were, “Well I’ll be dawg-goned!” Her husband was Capt. Agustus Byron French who ran the New Sensation.
Mary Becker Greene, the beloved “Ma” Greene obtained her pilots license in 1896 and her captain’s license in 1897. She had been married to Captain Gordon C. Greene in 1890, he had instructed her on operating a steamboat. She piloted the Bedford between Cincinnati and Louisville during 1897, it became extremely popular for its dependability and for its air of refinement. Her biggest thrill was taking the Greenland to the St. Louis World’s Fair in 1904, the crowds went wild over her. The Delta Queen flies today the flag which flew on the masthead of the Bedford Steamboat.
In 1880, Bowling Leathers, son of Thomas Leathers, married Blanche Douglass, daughter of James S. Douglass. Bowling built seven steamboats without giving notes for their costs. Blanche loved the river, she loved her husband and wanted to be with him, and in 1891 they had the Natchez No. VIII built. She got her license in 1894. The “Little Captain” or “Boss” Leathers was described as the most distinguished of Louisiana women. The Natchez VIII sank in 1918. Blanche passed away in 1940.
Posted by Sandra Guthrie Moore at 5:41 PM